One of the most difficult things about investing in or developing real estate is having the capital to do so in the first place. Luckily, under the Tax Cuts and Jobs Act (TCJA), passed last December and implemented in January 2018 (for tax returns filed in 2019), there are now certain features of which both investors and developers can take advantage.

Under the TCJA, which will run through 2025, both the 1031 Exchange as well as Opportunity Zone Credit can be of help to communities and investors.

Under section 1031 of the tax code, a taxpayer is able to defer the tax of capital gains if there has been an exchange of certain types of property. (For all intents and purposes, none of the gain or loss will be realized at this point.) This is called a 1031 exchange. In order for an individual to qualify for a 1031 exchange, the properties that have been exchanged must be held for productive use in a trade or business, or in an investment.

Properties that have been exchanged must be of “like-kind.” This means that both properties are the same in nature or in character even if they are of not the same quality. For example, the sale of an apartment building and the purchase of another apartment building would usually be considered like-kind to one another. However, a real property in the U.S. and a real property outside of the U.S. are not considered to be of like-kind. For purposes of the U.S. tax code, “like-kind” essentially means any property that is classified as real estate in the 50 states, Washington, D.C., and sometimes the U.S. Virgin Islands.

Though property that has been purchased for personal use does not qualify for tax deferrals under the 1031 exchange, if an individual is both a real estate dealer and an investor he or she may use Section 1031 to his or her advantage. However, for cases in which an individual is just a dealer (i.e. someone who holds real estate as inventory or purchases it purely for resale), he or she does not qualify for this section.

For situations in which a taxpayer has included equipment that has been used on the property in the lump-sum sale of the property, so long as the equipment does not surpass 15 percent of the fair market value of the larger property, it need not be identified within the 45-day identification period, though it must still be exchanged for property of like-kind in order to defer any gain under regulation 1031.

If an individual uses cash to even out a transaction, the cash itself cannot be deferred since it is not considered of like-kind and would be taxed at a normal rate for capital gains.

Although like-kind exchanges were originally required to be simultaneous transfers of ownership, the case of Starker v. United States changed that. In that case the court found that a contract to exchange properties in the future is essentially the same as a simultaneous transfer.

How to Obtain 1031 Recognition

The TCJA originally allowed for personal property to apply to the Section 1031 exchange, but as of 2018 that section of the Internal Revenue Code now applies only to real property.

In order for an individual to receive the full benefit of section 1031, his or her replacement property must have a value equal or greater than the initial property, and all of the proceeds from the former sale must be used to acquire the latter property.

For real estate investors and developers, it can be an unfavorable decision to take on the development or expansion of an economically-distressed community. Since return on investment is what allows for continuous building and investing, the prospect of spending a lot of money in a poorer area does not often appeal to many.

In an effort to incentivize these individuals to put their time and money into low-income areas, the government has launched an economic development tool, known as an Opportunity Zone. These “zones” are created to induce economic development, including job creation. This is the first new community development-oriented tax incentive program since the Clinton Administration. Despite first being introduced as a stand alone legislation in 2015, it lacked a vehicle to move it forward into federal law.

This past March and April, they were nominated by the state and certified by the Secretary of the U.S. Treasury via delegation of authority to the Internal Revenue Service, designating some select lower income neighborhoods as Opportunity Zones. Communities with this label enable new investments (in certain situations) to be eligible for preferential tax treatment.

In order to have been deemed eligible, state governors were required to submit their applications to the Treasury Department. In order for an area to potentially be eligible for Opportunity Zone status, it must have been:

These weren’t the only areas that could receive recognition: track areas that are geographically adjacent to the aforementioned census track and have a median family income that does not exceed 125 percent of the area’s median family income could have also been eligible. However, in that case, only a maximum of five percent of the overall designated state tracks could qualify under the adjacent exception. Each state had the opportunity to designate up to 25 percent of the total number of qualifying tracks in the state.

Because of all of this, it has become important for policy-makers to strategically decide which tracks, or areas, in their state made the most sense for designation.

Investors may defer tax on any gains invested in a Qualified Opportunity Fund (QOF). A QOF is an investment vehicle that is set up as a partnership or corporation, until either the QOF is sold or exchanged, or December 31, 2026 – whichever is sooner. QOF’s serve to invest in eligible property that is located within designated Opportunity Zones.

If the QOF is held for:

To note, if an investor holds the investment in a QOF for at least 10 years, he or she is eligible for an increase in the basis of his or her QOF investment that is equal to its fair market value on the date that the QOF is sold or exchanged.

Who Can This Benefit?

Not only can those who live or work in an Opportunity Zone thrive, but also those who invest a recognized gain in a QOF, as they can choose to defer the tax on that gain in much the same way that an investor can choose to do so in a 1031 exchange. Those corporations or partnerships that are interested in becoming a QOF, can self-certify, filing Form 8996, along with its federal income tax return. Corporations and partnerships interested in becoming a fund can find a list of designated Qualified Opportunity Zones to invest in at IRB Notice 2018-48.

Consult with an Experienced Financial/Tax Advisor

These new tax advantages are extremely helpful, but only if you know how to use them. That’s why it is important to consult with an experienced advisor to ensure that you are utilizing the new code efficiently and optimally for you individually as well as for the livelihood of your business. You certainly don’t want to miss anything. 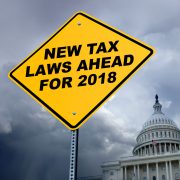